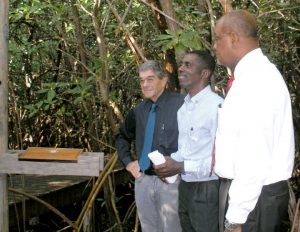 24th January 2012 was a milestone for the Rotary movement and the BVI as the Mangrove Boardwalk near the HLSCC Marine Centre was renamed during a festive and well attended ceremony in honour of a past president of the Rotary Club of Tortola, noted local architect Roger J. Downing, who always lives up to the Rotary motto: Service Above Self.

Past President, First Lady Lorna Smith introduced the honoree by giving reminiscences and a short biography. Mrs. Smith highlighted some of Downing’s architectural achievements (Necker Island, Little Dix Bay, Peter Island, Banco Popular, HLSCC Marine Centre, Commerce House and the Supreme Court) and his invaluable role as deputy chairman of the National Parks Trust for 30 years. Additionally, since 1985, Mr. Downing is the invaluable secretary of the BVI Philatelic Society of which he is also Vice President. He was also instrumental in the new home of the BVI Diabetes Association which was later named Dr. Jana Downing Diabetes Resource Centre.

President of H. Lavity Stoutt Community College, Dr. Karl Dawson said: “In my view this is a celebration of one who came and so readlly adopted and embraced this country.”

Ag. Premier Hon. Ronnie Skelton re-interated the many achievements Downing has been involved in. “I compliment the Rotary Club of Tortola for taking this initiative. It is important that our lagoon remains protected.” 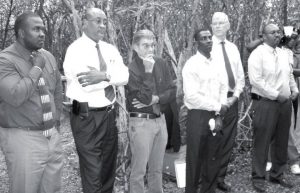 It was then up to the honoree to respond and in his humble way indicated, that he immediately declined when he was told about the renaming, as “working behind the scenes is more my style.” “Now I am most proud and delighted, as with the Dr. Jana Downing Diabetes Resource Centre next to our offices to have the ‘Downing’ name remembered for the future as being community orientated. It also reflects on Rotary’s commitment to our island society. I was definetivly surprised at this award as it was my understanding that only people who had passed on had special landmarks named after them. As you can see, thankfully I am alive and kicking.”

Downing went on to say: “Our family wishes to make a lasting contribution to this Boardwalk project and has agreed to fund the materials for the “Look out Tower”, so I would respectfully ask President Brian and Jonathan to come forward and accept this check for the budget cost of the Tower, plus a little extra for a plaque to reflect the Downing name. Once again, probably undeserving, but I am extremly proud to accept thegreat honour. Thank you all most sincerely.”